In the past, Habbo have used their monthly campaigns to celebrate current events, take us around the world or even take us to another time period. This time around, we get to explore the 80s-based aesthetic Vaporwave!

“Read more” below to see what 80s and vaporwave-themed items we can expect in the coming month!

But what IS Vaporwave? I hear you ask… or maybe you already know what it is but let’s just go with the assumption that someone reading this has no clue.  Having first emerged into the internet world in the early 2010s, Vaporwave is an art style (and microgenre of electronic music!) that takes inspiration from the 1980s.

The first rare we have coming up is the Retro Jukebox! Although it can’t be used as the classic Jukebox that we’re used to seeing on Habbo, it does play its very own unique tune – I expect this’ll be something of the Vaporwave genre, and will only play once the furni has been interacted with. Let’s just hope it doesn’t get annoying quickly…

The Miami Motorbike is a beautiful seating item that we can expect to be released as a rare. It has a secondary state that turns the lights off for when you want to park. So environmentally aware.

The Vintage Polaroid Camera is the first clothing rare we can expect in this campaign. With the popularity of the Paparazzi Camera I think it can be anticipated that this Polaroid Camera will be a favourite among players.

Another retro rare we have to look forward to is the Retro Rollerskates. I, for one, am VERY excited to see if these actually work on the skating rink furni or if they’ll be replaced with the auto-skates once you’re on the skating patch.

August will be the fifth month in a row that we’ll be seeing the released of a Limited Edition Rare, and this time around it’s the Gleaming Luxury Car! This gorgeous creation has two different states, one which looks exactly like the picture above and another that makes it DIGITAL.

While we’re set to see the return of SIX old bundles, we’ll also be seeing the introduction of two BRAND NEW ones; the Vaporwave Street Bundle and the Miami Nightclub Bundle!

We also have a whole load of new 80s inspired clothing coming our way!

The first two of these being the Disco Suit and 80s Locks. The hair itself is not the prettiest thing I’ve ever seen but I’m sure it will make for some interesting outfits around the hotel… for a hairstyle named “80s Locks” I would’ve hoped for more curls and even MORE volume but I guess we’ll have to take what we’re given. The suit I’m also not a huge fan of, but as long as parts of the outfit can be worn separately, I’m sure it will be a great addition. I’m also very hopeful that you can recolour it to be completely white then go to Club NX and live out your Saturday Night Fever dreams.

We also have two new faces coming our way; a whole new expression in the Gangster Face that accurately depicts how I feel on the inside when looking at that previous hairstyle. As well as the new Retro Makeup to help get your Habbo all dolled up.

Another item coming soon is the Bubblegum Bubble, this has already divided some players. While it looks cute and I do believe it is a good addition to the clothing in the hotel, I also think that it would have been great as an effect, where your Habbo would actually blow the bubble rather than having a perfect bubblegum bubble constantly attached to their face. We can also expect another hairstyle – the Modern Mullet. While I doubt I’ll be wearing this at any point, I MUCH prefer it to the joke that is the “80s Locks”.

In August we can also expect to see the return of CRAFTING. This time around, the crafting system works a little differently.

To craft anything from this campaign you’ll first need the Digitizer crafting table – which takes the form of old fashioned computer. You’ll also be needing some Floppy Disks (good old nostalgia) and the Futuristic Rubik’s Cube. While the crafting table and Floppy Disks will be available to purchase from the catalogue, it has been revealed that the Rubik’s cube will only be obtainable through completing games and challenges in the client.

One aspect of the crafting system is that you can create four new clothing items – this being the Jewelled Glasses, Holographic Party Dress, Miami Beach Shirt and (perhaps already everyone’s favourite) the Daffy Funk Helmet.
On the other end of the mystical crafting system, it will work in a similar way to the Purification Device that was released for Halloween a few years back. If you purchase furniture items that are released with this campaign, you can use the crafting table and ingredients to make them DIGITAL. With this new function you can create a brand new digital world! HOW EXCITING. I’ve created a basic graphic for you below to showcase each item before and after it’s been digitized (aren’t I good to you?). 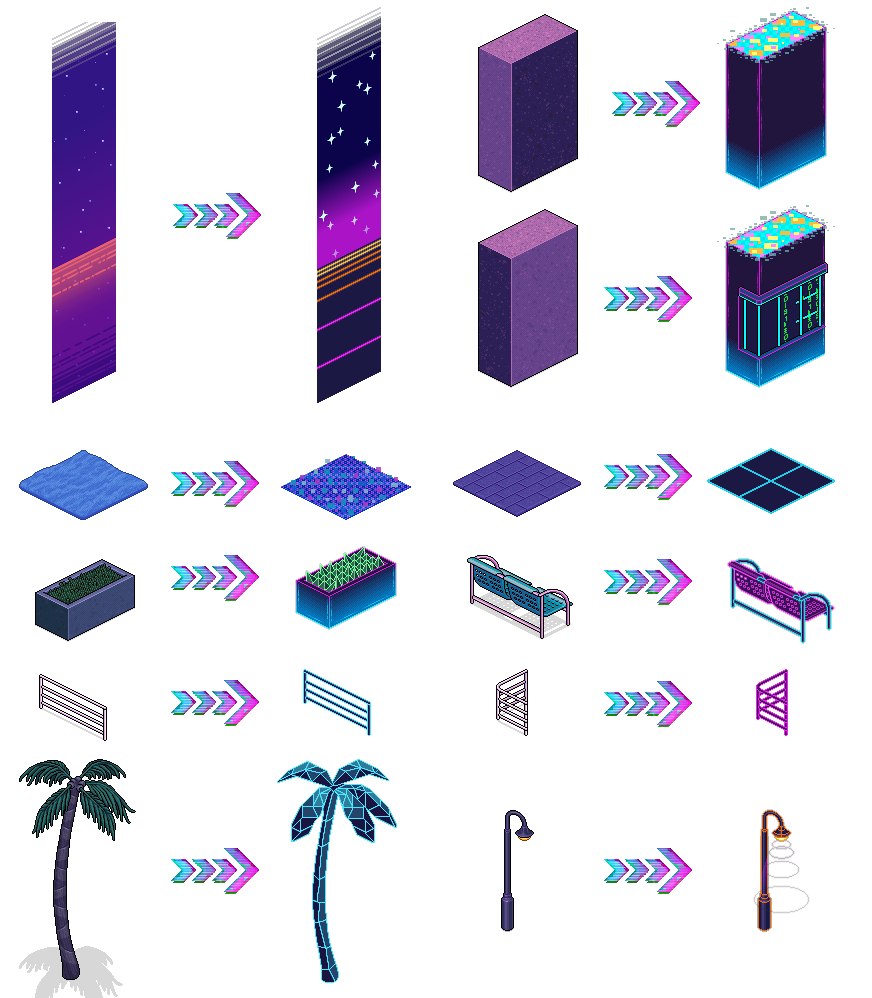 Personally I love this feature and think that, if you’re willing to buy the furniture in the first place, this will make for some amazing builds and be a refreshing change from the typical room themes we’re used to seeing. JUST LOOK AT THAT DIGITAL SUNSET.

Along with the furni items that were included above in the “Crafting” section, we’re being treated to even MORE items to fulfil your 80s dreams. 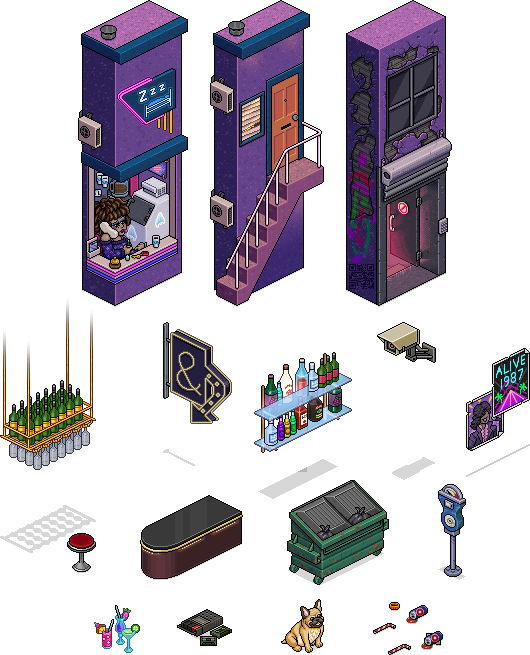 What do you think of next month’s releases? Will you be creating your own digital haven? Did I mention I hate the 80s Locks hairstyle? Will you be purchasing the LTD?

Gangster face is TOO funny I am going to use that so much. Some of the furni’s really pretty for building too although that dog is even uglier than most of the previous Habbo dogs and something seems off with the car to me… dunno what but not loving it even though it’ll be mega popular

new camera wooo!!!!!
there many other things I like as well but definitely want wear camera and skates

HEY. YOU READING THIS.
THIS IS THE ROOT OF VAPORWAVE
https://www.youtube.com/watch?v=dN0czUMRMU8
ALL HAIL CHUCK PERSON
NICE ARTICLE & PACK