Are you a skate fanatic? Are you the next Tony Hawk? Well feast your eyes on this! 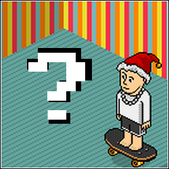 According to a Habbo news source, Habbo are to release a brand new skateboard effect and skate floor patches for Habbo rooms!

It’s not confirmed, but a lot of Habbo users are claiming this is a definite feature; some users say that this feature is an amazing idea and it will welcome new users to the client that will do skateboard raids over the hotel and maybe host skate-off tournaments. Some users say they like the idea and would be even better if Habbo created ramps and allowed you to spend Habbo credits/pixels on customizing your board, also if Habbo made it possible for your Habbo to do stunts such as 360’s and 720’s. Whilst some users say that this looks tacky and it’s “Just the same as a hover board, but with wheels”.

This is definitely something that is debatable and many different opinions and questions will be brought forward.

What is your opinion on this up coming feature?