Today, the winners of the ‘It’s Tricky‘ competition were announced and again Habbo didn’t keep to their guidelines. They originally said they would pick 25 of 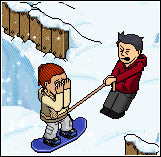 the best to win the prize but instead they increased this to 50. I don’t mind that more won but it’s the fact that the prize was a Rare Balloon Machine and if more and more are released then the value could be decreased in the future!

There were some great competition entries and one of them made me laugh, it was simple, cheesy and just amusing for me [pictured]. However, some weren’t as great but Habbo still chose to pick them. On the flip side, everyone who entered received the badge and I am more than happy with that, Habbo gave a furniture prize and it’s good to see them listening to us more. In addition, to the winners, it was nice to see some of our own Habbox members winning, such as Vigas, Kromium and Finalz (others too), good on you boys! Congratulations to them and to all the other winners.

The prize they all won was a Rare Balloon Machine, 3 Snowboard Patches and 2 Snowboard Ramps! I have to admit that is a very nice prize, let’s hope more of these come in the future.

Did you win the badge or were you one of the 50 lucky winners? Read more and Comment below, I would love your opinions on the whole process!