Typhoon Nesat has demolished parts of The Philippines, Skimmed parts of China and is now heading for Vietnam! 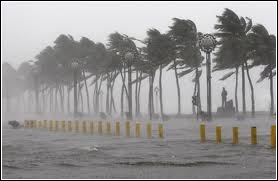 Typhoon Nesat has struck parts of The Philippines, leaving a path of destruction. So far 41 people have been killed, 45 are reported as missing and over one million are without power. The typhoon has also left many people homeless and fleeing for their lives as the worst flooding in over a decade engulfs the country. The strength of the winds hasn’t improved the situation, with 120mph winds battering the country as well.

The Typhoon has left many people confused about what to do. Emergency services are restricted due to the weather so, many people are simply waiting on the roofs of their houses for people to rescue them via boats.

The worst isn’t over, the Typhoon then spread to China to the eastern tip of the Hainan island, closing schools, suspending ferry services and causing fishing boats to dock for shelter. Also, in Hong Kong the stock exchange trading was stopped early, and many businesses closed due to being fearful of the potential damage from the Typhoon. Many flights were also affected in Hong Kong – 245 flights were delayed, 20 were cancelled and 22 diverted to other airports.

Reports are now in that the Typhoon will strike Vietnam next. So people have immediately been preparing for the worst, ensuring they are extra safe and protected against any potential disasters. Also, the floodwaters in The Philippines are now receding, so help will arrive much quicker for those still stranded.

A final note. We all wish for the victims of the disaster to R.I.P. and that everyone missing will be found. We also hope that everyone in Vietnam and other Asian countries remain safe.

Do you want to leave a message for the victims of this disaster? Has anyone you know, been affected by this? If so then click ‘Read More & Comment’!