UK unemployment has risen, yet again and is now at a 17 year high! 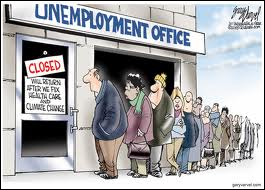 Between June and August, UK unemployment rose by 114,000 to 2.57 million – which is (according to national statistics) a 17 year high! The unemployment rate for adults has also risen to 8.1%. The jobless rate for teenagers is also reaching worrying levels, as figures reveal that 991,000 16-24 year olds are currently unemployed which is a record high, at a jobless rate of 21.3%. This is making more and more teenagers anxious as the figures slowly edge towards 1 million 16-24 year olds out of work.

Many politicians were quick to comment on this current situation, with Ed Miliband (leader of the labour party) saying “A year ago… the prime minister justified his economic policy by saying unemployment would fall this year, next year and the year after. Isn’t it time he admitted his plan isn’t working?” and prime minister David Cameron rejected this criticism and said he would stick to his plans to reduce the deficit by 10%.

Other comments that politicians said included;

. The Employment Secretary, Chris Grayling, said that what the UK was now seeing was “the impact of the international financial crisis.”
. The Bank’s chief economist, Spencer Dale, has warned the UK is suffering one of its worst ever periods of financial turmoil.
.  Mr Grayling said the “important reason why we are pursuing deficit reduction was to retain the confidence of commercial markets and to encourage businesses to set up in the UK.”
. The chief economist at the Institute of Directors, Graeme Leach, said: “These are grim figures and are likely to get worse before they get better. But abandoning the deficit reduction plan will do the unemployed no favours.”

In an attempt to help the economy, the bank of England will be injecting a further £75 billion into the economy. So there is still mixed feelings about where the economy could be heading, but many people seem to be annoyed with how David Cameron is running the country – immigration rates rose by 20%, yet the conservatives were aiming to reduce them by 10% and now unemployment rates have continued rising, another thing conservatives failed at controlling.

We’re in such a cheerful mood today, that we’re providing another joke for you about politicians! Here it is;

Honesty in politics is much like oxygen. The higher up you go, the scarcer it becomes.

Do you think the conservatives should have been elected into power? Do you think employment will start to lower? Are you 16-24 and are lucky enough to have a job? Share your thoughts by clicking ‘Read More & Comment’.