More features are available for Guilds/Groups!

Groups/Guilds may have been removed from the hotel temporary, but there are still lots of features you can hear about! Everything from new furniture to new badge icons..the new features have it all. The great thing is, it still costs only 10c to create your own group/guild – bargain price.

It’s time to reveal the new features (we know… the excitement is too much!) So, here we go…

Eek! 8 new pieces of furniture will be arriving for groups. They include;

2 walls.1 of which is patterned and contains the group badge on the wall, the other is a plain wall with a brown strip along the bottom.
2 stools. 1 of the stools has a pretty pattern on the seat whereas the other one does not.
A sofa with a fairly interesting pattern on it.
A ‘gold pennant’ – this is basically, a pole which has a flag on it, displaying a picture of your badge. They’re associated with medieval times.
A carpet… not much to say really – a patterned carpet.

Finally, the last piece of furniture is a ‘FRANK Trophy’. The word ‘Frank’ is displayed vertically on the trophy, in black letters with white dots inside them – this is not part of the group furniture (we think), so maybe the ‘Frank’ campaign is returning!

A brand new feature for groups! You now have the option of changing the primary and secondary colour for furniture. At the moment, you can only edit the colours of the furniture mentioned above (excluding the frank trophy), but we are hopeful that they shall introduce more furniture specifically for groups in the future! Why not take a look at the colour editor; 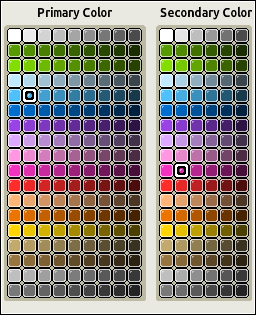 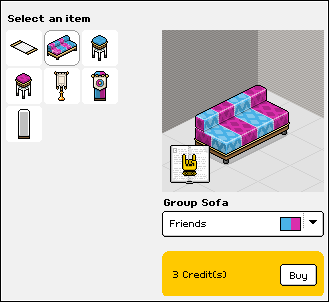 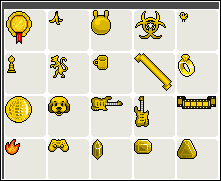 Woop! There are new badge icons available for groups – do you want a microphone, a mirror or maybe even some letters on your badge? Then Habbo  have provided that for you – there are also new bases and a wider range of colours available!

Fact: You can place the HC, VIP, Credits and Pixels logo on your badge! Sounds quite interesting.

(On the right, you can see a small sample of the badge icons).

You can now; 1) Enable members to drop furniture in the group’s homeroom and 2) View a more detailed outlook of members.

1) You will now have the option to give members the ability to drop furniture in the homeroom! They will be able to remove their furni if they wish, and the owner/administrators can remove any furni placed in there. If the furniture is ‘removed’ – It is actually sent back to the owner’s inventory (so no, you can’t scam).
2) There is a more updated and detailed outlook of members available. If you click on 1 of the group members, a box comes up displaying; 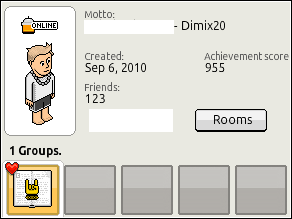 As you can see on the right, it is a very modernised version of a Habbo feature.

There are a few negative issues surrounding the update of Groups/Guilds;

– Technical issues: Unfortunately, many users noticed that when the Groups were updated it gave every member of the group rights to a groups home-room without the owner having to distribute rights to these users. This led to many rooms being trashed causing a lot of anger, so Sulake have removed the feature for the weekend. Also, many users who paid 10c for the group – received an error, their credits were ‘taken’ but they did not receive a group. Sulake have also noticed this issue and have said that users would be refunded shortly.

– Discriminatory issues: Yet again, many people have complained over the fact that only VIP’s have the option to create a Guild (via the catalogue). HC’s and Non-Hc/Non-Vip’s have been complaining that they don’t receive enough new features and are often ‘pushed to the bottom’ of the ‘updates pile’.

It looks like Guilds are going to be an outstanding, brilliant and useful feature for Habbo! Although it’s incredibly sneaky how you must have VIP to purchase a Guild which costs 10c… 25c for VIP + 10c for a Guild = 35c. How sneaky! However, people seem to be fairly pleased with these upcoming updates and expect more ‘stuff’ like this in the future!

Will you be purchasing a Guild/Group when they return? Which is your favourite update regarding the Guilds? Share your view now by clicking ‘Read More & Comment’!