The famous boy-band ‘Westlife’ will be splitting up after 14 long years. 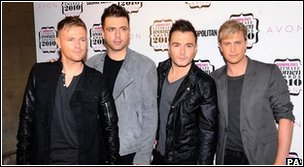 The Irish pop group have announced that they will be splitting up after a ‘farewell tour’ next year, in order to pursue “new ventures”. The famous boy-band have had 14 number 1 singles such as ‘Swear it Again’ and  ‘Flying without Wings’ and have managed to sell an impressive 44 million records around the globe.

The band announced that they would be splitting up on the 19th of October and also added; “Over the years Westlife has become so much more to us than just a band. Westlife are a family.” The band was managed by X factor judge ‘Louis Walsh’ for many years and have faced many battles such as the departure of one of their group members ‘Bryan McFadden’ in late 2004.

Westlife have had many success stories, such as releasing the Comic Relief charity single in 2001 – their own version of ‘Uptown Girl’, originally sung by Billy Joel.

In a statement on their website, the band also said “Thank you to our fans who have been with us on this amazing journey and are part of our family too. The decision is entirely amicable and after spending all of our adult life together so far, we want to have a well-earned break and look at new ventures.”

You will have a chance to purchase a new album by Westlife in November – remaining members ‘Mark Feehily’, ‘Kian Egan’, ‘Shane Filan’ and ‘Nicky Byrne’ are due to release a ‘Greatest Hits’ album on November 21st.