Today is the 4th day of HRH the Duke of Cambridge and HRH the Duchess of Cambridge’s visit to Canada, as part of their official royal tour. 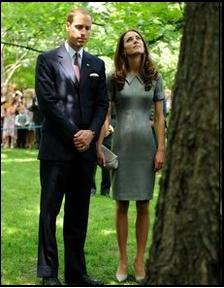 Just this morning the couple sailed on a Canadian Frigate from their hotel in Montreal into Quebec City, the capital of the state of Quebec. The St Lawrence river was the ideal route, and in the early hours of this morning the HMCS Montreal was being prepared for the royal sweethearts. Firstly, the pair will pray on the top deck of the frigate (the helicopter deck), from where they will take a helicopter to a Quebecan youth project and military ceremony.

Yesterday, they visited the Canadian Government Houses, where they remembered Prince Charles and Princess Diana, and also planted a Canadian tree in the grounds nearby the previous one in commemoration of their time there and to Diana. They visited a hospital for children and a cookery school, as well as welcoming 25 news citizens to Canada, originating from 12 countries.

Later today they will visit community events, such as barbecues, parties and market stalls, all put up for the visit. They will then fly to Prince Edward Island, to an official welcome tomorrow. This is the home of Anne of Green Gables, a fictional character said to be one of Kate’s favourites.

Here is the general outline of the highlights of the trip, in case anyone wants to visit the couple:

What do you think? Are you planning to see Will and Kate later on in the week, or are you not bothered? Leave your comments below!