Identical twins Cameron and Tyler Winklevoss have ended their years-long row with Facebook founder Mark Zuckerberg, after he apparently “stole” the idea from the pair. 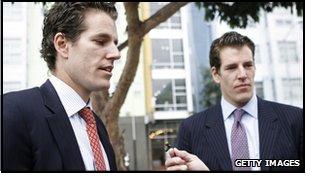 Originally, the pair accepted $20 in cash and $45m worth of stocks in Facebook, which has now doubled to over $100m! This however was in 2008, and since then the brothers have confirmed they are not happy with the money and stocks, regardless of their growing worth. In January this year, they petitioned to reopen their court case from early 2008. They also noted that they would be willing to revoke the before-mentioned settlement in order to gain a larger sum.

After the film, The Social Network, many people say the legal affair will be forever remembered in the world of social networking. In April this year, the duo were told by a US appeals court that their case would not be furthered, and they could not back out of the deal. They then threatened to take the matter to the US Supreme Courts, but just days later declined their previous statement. In 2003, ConnectU, the company which was owned by the Winklevoss twins, hired Zuckerberg to code their website, and it was then that he had stolen the idea from the information files in their computers.

Both Cameron and Tyler were previously rowers for their Harvard University rowing team, and then for Oxford too in 2007. The next year, just before their court settlement, the pair competed in the Beijing 2008 Olympics, in the 4-person Coxless Team event, a branch of Olympic rowing. Unfortunately the team disappointed fans who were hoping for a top 3 finish, coming in 6th, still a feat in itself.

Facebook has never been seamless. A man murdered his wife after she changed her marital status to “Single”, when he had moved out just days earlier. He left Emma Forrester to die after he stabbed her with a butcher’s knife, and his children were scarred for life. Often, online arguments can lead to very real incidents, and that’s all too true in this case. Over 200 million people use the online networking site every day, and there are around 750 million registered users. With this many regular visitors, it’s undoubtedly going to cause problems, but none as big as the Winklevoss-Zuckerberg court case…

What do you think? Did you have a say in the making of Facebook, and what would you like to change about it? Would you accept over $100m worth of stocks just to forget that it was your idea?