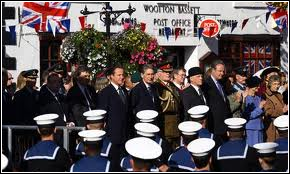 Thousands of people turned up at Wootton Bassett for a ceremony in which Princess Royal presented the letters patent on behalf of the Queen. This move is recognition for the role the town played during the repatriation services of UK military personnel killed in war. It is quite an historic moment because the last town to be given royal status was Tunbridge Wells in Kent, in 1909.

At the start of the ceremony, former mayor of Wootton Bassett Steve Bucknell led a minute’s silence to remember service personnel who have been killed. The event was also attended by David Cameron and the new Defence Secretary Philip Hammond, Princess Anne also made an appearance at the ceremony and said the community had come together in the most extraordinary way. She also made a speech, in which she said;

“I am privileged to be allowed to add my thanks to those of Her Majesty the Queen and the whole country for the example you set in responding with dignity and respect to the losses that this country, operational responsibilities have forced upon us.”

Princess Anne was also greeted by the Lord Lieutenant, John Bush and was given a tour of the exhibition in the town’s library before she made her speech.

The decision to rename the town was taken by the Queen following a petition from the prime minister.

The first repatriation service took place in Wootton Bassett in April 2007 when the bodies of military personnel began arriving at the nearby RAF base at Lyneham. Since then thousands of people have turned out to pay their respects to servicemen killed in conflicts in Iraq and Afghanistan.

Don’t you think… it’s simply amazing how a whole community can come together and show their respects for our brave soldiers.