The world has their newest, tiniest man! 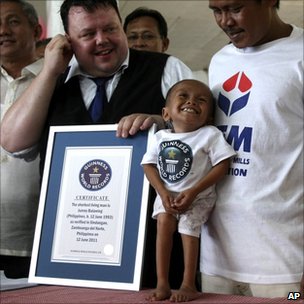 As of this morning, the shortest man alive is a Filipino called Junrey Balawing, pictured just above the height of his new award. Today is his 18th birthday, and can now count as an adult in any future world records. Guinness have been following him, but could not officially measure him until today, and they most certainly did! The devices used came to a conclusive 59.93cm, just below two feet…

Junrey’s father shown to the right of him told reporters that he is the same height as he was at the age of 2, possibly a couple of centimetres growth, which is about right for a boy of 2. In the picture, he doesn’t look 18, at least not to me, but Guinness have proof of his age. He is over 7cm shorter than the last record holder, a Nepalese man. This may seem like a small amount, but in examples a short as Junrey, it makes a giant (get it?) difference.

Close family and friends say he has trouble standing or walking, and the community around him are very protective. Some say it is because he is “valuable” and “cherishable”. Craig Glenday in the right handed the award to Junrey, and confirms he is the shortest man living.

Many politicians from the area, along with less notable people, gave gifts of money, which the family said would help add to their tiny savings. Mr Balawing said to everyone “Thank you to all of you for supporting my son, the world’s shortest man”. As today is Junrey’s birthday, it is his party, and Craig and his team were welcome guests. As he blew out his candle, Junrey said that he was very tired and wanted to spend the rest of the day with his 3 siblings, all of average height.

Scientists are not sure what has caused this, but what do you think is wrong? Or is it not wrong at all, and is Junrey just scaled down from a usual boy his age?