Join the team
DJLoading...
Now playing:
Loading...
...
WTF(riday)? – Girly Special0
By Habbox Archives - Posted 4th July, 2015 at 9:14 pm
SmoothCriminal is away and the way to overcome that is by having an all girl play date by allowing Habbos to ask question’s to the Habbo staff! 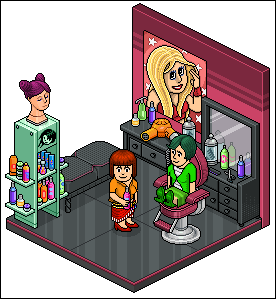 When I entered my question last week I never felt like I would win, because come on, I didn’t think they even read the questions! Maybe I was wrong? I’ll never know. Seeing the article in the news thread this morning I clicked and saw my name there, I was overwhelmed, I bagged myself a Nest(led) tree and so did a few other participants!

The questions were girly enough for me to withstand them as I’m not really a girly-girl but I thought, why not? I even used American terminology to get into the good books, least it worked!

However, I cannot take all the winning and let it get to my head, the other winners deserve a mention too, so here they are:

Puffin: A boy? I couldn’t wake up as a tiger? Or SuperWoman?


OH NO! You’ve got to leave for work in 10 minutes! All of your hair products have run out, and your straightening and curling irons are broken! QUICK, what do you do to get ready?!?!?! Sent in by CaliforniaCutee

Fozzie: This is pretty much my morning, every day. Only my straightening and curling irons aren’t broken, I’m just lazy. I high messy bun works best for me!


When was your first slumber party? Sent in by Kfnx

Puffin: I don’t remember the first one, but I vividly remember one from when I was 15, and we were sleeping over in a friend’s (creepy) basement because we were heavily into scary movies. My friend started sleepwalking and talking in her sleep, it was dark and our imaginations were running on super drive. Five shrieking girls, that’s horror on your ears, let me tell you!

Fozzie: I think I was about ten. I remember watching the Beetle Juice movie and being so scared in a strange house.


What has been the most embarrassing “girly” moment you’ve ever had? Sent in by Mileut

Fozzie: I bought a new glitter eye shadow when I was thirteen. I thought it was the bomb. That was until I had an allergic reaction and my eyelids swelled up like crazy in the middle of Food Tech at school

Puffin: We were 14, and walking home from school I’d always insist on taking the longer route so that I could steal glances in the direction of my crush’s house. It was a beautiful sunny day and me and my two best friends were all very cheery and decided to come up with alternative lyrics to a song we liked. All three of us had to each make a verse dedicated to our respective crushes. Giggling and singing, we were approaching the house of my crush. I directed everyone to quiet down in case he was around. My friends threatened to blow my (very poor) cover, and so we were playfully shoving each other around, me trying to shut them up.. and that’s when I noticed that he was walking right behind us! He had clearly heard my singing, because his face was bright red… and although I had no mirrors, I suspect mine was, too!


If you look in your closet, how many pairs of shoes do you have? And what are your favorite pairs? Sent in by ToRow1

Puffin: If I don’t count the pairs that are put away indefinitely, I think I have between 20-30 pairs, they range from sandals to sorrels and everything in between. My favourites are a pair of Oxfords in thin, black leather. They go with everything and feel like walking on air.

Fozzie: I counted last night and I have 13 pairs. My Ugg Boots are by far my favorite. So ugly, so comfy!


Puffin’s Question 1 – So now that SmoothCriminal is taking a break, are we talking a girl’s night out… eh? eh?

Sent in by CheeseDroid
You know what they say, when the cat’s gone… there’s a lot of dancin’ on the tables!


Puffin’s Question 2 – Which Disney princess do you most relate to? Sent in by JacobSilva
That would be Sleeping Beauty (aka Aurora). She was always my favourite Disney princess growing up, who wouldn’t wanna sleep for 100 years and be woken up by a prince? Win-win.


Fozzie’s Question 1 – Name five of the most important things in your life? Sent in by -iROQkxBlUE:
1. Family and friends
2. My pets ♥
3. Cooking and eating good food
4. Trying new things and adventuring
5. Doing things that make me happy (aka sleeping in and swimming at the beach)

Fozzie’s Question 2 – Who is your favorite girl band?! Sent in by sugarisgood!
I used to love Destiny’s Child but if I had to pick a more recent group it would probably be the Pussycat Dolls.

This week, you can ask a question to them individually or all three, best of all SmoothCriminal’s back and I feel that the price is influenced by that. He’s figured out what the girls have been upto whilst he was away so this weeks prize is four Dungeon Pillars