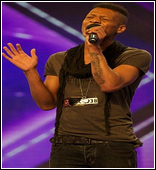 Although Lascel is 20 years old and not breaking the law, this discovery won’t go down well with some viewers of the show. The X Factor is supposed to be for all the family, so quite a few parents could be displeased if he gets through to the live shows. This is understandable, as many young people look up to those they see on television, however there’s nothing in the official rules that says it’s not allowed, it’s simply looked down upon.

Do you think Lascel should still be allowed to compete on the show? I personally think he should, however if he were to win it could tarnish his image before he’s even had a chance to prove himself as an artist.