No panic, human! Your recent dreams have lured you to visit this website and check this article; we have been there. On this unusual evening, the Habbox folks invite you to combine brain-sucking aliens with two-headed squirrels; in that mix, we’ll taste the flavour of what’s certainly one of the world’s most interesting computer games – not just because it’s LucasArts’! Come on, dear, let’s talk about it…

Zak McKracken and the Alien Mindbenders (1988)

Imagine yourself being a tabloid columnist in San Francisco, USA, whose home is that one below, with the fish and the feline clock. Let me remind you that there are living entities within that environment while your own self-esteem is ruined by your loneliness and curious, repetitive dreams about Mars, a machine driven by coloured gems, and the duplication of a cute girl dressed in pink.

Today, you go to work with the innocent expectation of getting a book of your own published and, in the exhaustion of refusing it loads of times, your boss promises to think about it, depending on your performance in writing an article about two-headed squirrels living in Seattle.

You subserviently accept this proposal, and after collecting enough information, you take a funny gem found in a cave back to San Francisco. You gently deposit the object in the hole of the door of a stranger who is supposed to know what to do with it.

Little do you know that this “stranger” is, in fact, the cute girl who so insistently frequented your dreams (Annie). And, of course, that surprised expression on her face announces that you also starred the dreams of herself, accompanied by a mysterious machine driven by this and other gems that will be responsible for the noble mission (to which you were involuntarily put) to eliminate some aliens who, in a frivolous act, are reducing the intelligence of all human beings to dust via telephone signals. 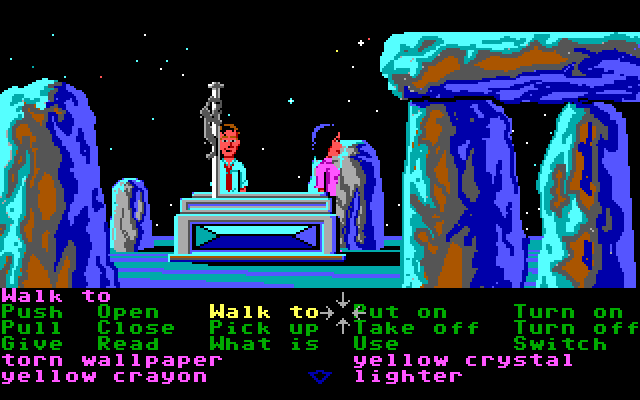 Zak is probably the number one recommendation item among Point’N’Click games enthusiasts, because of its distinctive sense of humour and the insertion of the contemporary universe you and I know so well (HUMAN BEINGS WITH POOR LOVE LIFE! BIG CITY! ETC!)  mixed with science fiction, the possibility of interacting with almost all the elements and the fun of watching the consequences of our acts – even if it means our loss!

The simplicity and the rather rustic use of text in place of images and icons may make this game relatively unattractive for people who have never played a computer game released before the 90s and are not accustomed to puzzles in general. However, if you’re actually up to this challenge, you will only find joy in this game. Get yourself ready to have HEADACHES whilst exploring the infinitely confusing mazes and get stuck in the middle of the gameplay because you “don’t know what to do next“! It requires you to interact with the game universe with a fair amount of creativity and curiosity to find solutions until you somehow manage to save Earth from stupidity. RECOMMENDED!