Welcome to our first Graphics blog!

Today we’ll be sharing our inspiration for the 4 Habbox Summer Spectacular characters.

If you fancy the inside scoop on the inspiration and development behind the characters, just click read more and LUCPIX and I will take you on a journey..

The Habbox Summer Spectacular theme HISTORY was announced, and we were given the task to design the team characters. Every year is a tough choice on what the theme will be, but this year I was particularly happy with it because it didn’t evolve non-human characters like Spyro, which was a character from last year. We had to design 4 characters, one for each team.

First up was the Cowboys and Greeks, which were designed by the talented LUCPIX. LUCPIX always does an amazing job designing characters, his style is unique and absolutely amazing. Let’s hear about the inspiration for his designs:

Cowboys:
“The Red Cowboy was the first mascot made for this year’s HxSS and perhaps, in terms of ideas, was the easiest to do since this universe, to some degree, is indirectly present in my Brazilian culture, even if the patterns that make our cowboys cowboys are totally distinct, functionally and kind of aesthetically, from the ones we usually watch in our average Far-West movies, because they are, of course, co-present in entirely different historical contexts. The aggressive spectrum goes against our modus operandi… most of the time! Even so, it was possible to use both realities as good references and make an intersection with the boiled blood and the strength that, I believe, will be what our local little cowboys are putting their faith in.”

The Greeks:“The genesis of our “Homem Grego” is result of a very spontaneous and even subconscious process that started when a thought from one of my favorite high school’s philosophy classes came to mind: A significant part of it explored the meaning of Raphael’s painting “School of Athens” and we have spent most of the time trying to “read” the room Plato is in, mainly because of his finger pointing upwards. It was quite intriguing to realise the symbolism behind every single action of them! Raphael’s Plato looked “universal” and of general knowledge enough to try and produce a very mascot out of it instead of opting to draw a mythological figure (so many to choose!!)… even though our almost-undressed Greek isn’t necessarily Plato himself, or an integral version of the HC Greek mask which I, curiously, was totally unaware of until a few weeks ago after my return to Habbo!! Furthermore, in spite of the fact it makes a stark contrast to his rivals’ medium-to-high aggressiveness, that wise little man carrying, for some reason, a green book of wisdom shows, however, anything but vulnerability. Probably proving us that muscles and weapons will definitely not be everything in this year’s HxSS.”

The other characters were designed by me, ExtraKen. I actually had a lot of fun making these! Here is a little bit about what inspired me:

The Pirates:
“When you think of pirates you usually think of old dirty people trying to steal other peoples boats and treasures. Well, I wanted to make a pirate that looks kind of sexy and cool at the same time, even though he has a wooden leg and an eye patch which are the most known features of a good pirate. I also decided to give the overall image a more “Thug” look, thus my sexy cool thug pirate was born! I was lucky with the black colour scheme, but I decided to add some purple in it to make it a bit more interesting. I felt like something was missing and than it hit me, a good pirate has a parrot! Taadaahhh, a team character (plus Bob the parrot) was born!”

The Vikings:
“Now this for me was a challenging one. Usually when you think of Vikings you see old fat people with axes swinging and long greasy hair with beards etc etc. I figured NOT GONNA HAPPEN. I feel like a HxSS character needs some sexiness into it (there’s a theme to my work..ha!) It all suddenly became clear when I thought about THE SERIES VIKINGS and there hoard of handsome men! I can honestly say that those guys were my inspiration for the look I created! With the shaved sides on the hair and the braids on the long parts. For the rest, I wanted to have a fur looking drape and a good shield.. oh and of course every handsome Viking needs a big AXE! It was the perfect recipe for a Viking.”

There you have it folks, I hope you enjoyed the little adventure inside the minds of the Habbox Graphics team! Thank you for reading. 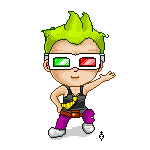 Love these so much, you’re such talented chaps thank you xoxoxo

We’re so lucky to have you guys with us. Thanks for creating masterpieces

Such talent, much good, very wow

so much talent my friend i am a very proud Guru