‍
Oh yes, just one week until October, and that means HALLOWEEN!

Not only that, but HABBOWEEN!

Not only that, but HABBOXWEEN!

Not only that… wait no that is all.
‍

On this most costume-y of holidays we have a whole bunch of treats (and hopefully not too many tricks) to celebrate online. Habbox always puts on a famously impressive event of some sort and Habbo themselves tend to have something spooky up their pixel sleeves.

We’ll have more info on all that as we get nearer the time, but first let’s look back at thirteen previous furni ranges that have made their mark at this time of year. More accurately, this is MY article so we’re going to look at MY favourite piece in each release!

If you want to look through everything and see if you agree or disagree with my favourites, check out the wiki pages on the various Habboween ranges.

Sometimes the old ones really are the best – look at me for example.

That part you’re not allowed to disagree with; it is a fact that I’m wonderful and none shall dispute it. You may however have something to say about my favourite part of the oldest Habboween releases –

DUCKS.
Rubber ducks have been a part of Habbo ever since its release, and the super spoopy versions remain stalwarts of the Habboween season. Some classics never die – these ones already did.

This is technically not a Habboween release as Gothic furni first came through in January and February across the hotels. That said, it has since been rereleased around this time and is obviously fitting with the overall theme. Periodically, new pieces have been added to the range, and my favourite isn’t one of the originals but is a brilliant piece of art nonetheless.

It’s a TOILET WITH A GARGOYLE ON TOP OF IT. WHAT.

This extensive range had the theme of a hospital that was overrun with a deadly (and rather messy) virus. A lot of stuff involved was green… very green. I’m not a big fan of green, or of hospitals as it happens, and so my favourite piece from this set is something of an outlier to the theme.

A bath full of blood. Absolutely grim, and the implications are frankly horrific. When you look at this as more than just something for your Habbo to sit in, it’s actually somewhat scarier than most other pieces of furni across the Habboween ranges.

The range released in 2009 is still one of the most used in spooky room building, which is no surprise since it includes plenty of general indoor furni as well as a haunted version of the forest wall piece. My favourite from this is kinda boring really, but it’s one I use a lot myself.

“Creaky floor” is not something that will inspire anyone much just by looking at it by itself, but it’s a superbly made floor tile that works with loads and loads of themes, so for pure utility it wins the day for me.

Who do? You do!
The voodoo range has a lot of small pieces that don’t really get used much, but there are also some wonderful room building pieces like the dark water, swamp fog, tree teleports, and of course:

The absolute beauty that is the fog wall. It’s pretty, it’s brooding, it’s big enough to not take 15 weeks to build a whole wall of it. This is one of my favourite wall pieces to use, and it also works rather well with some of the other wall furni you can find around the hotel.

In 2011 there was only a small number of furni added to the general Habboween range, and the name here actually comes from the mini-campaign that Habbo set up for the season. It was a bit convoluted for my liking, and most of the new furni pieces were ancillary to other ranges like the Haunted House, but one piece I do actually like by itself.

What’s halloween without graves for zombies to rise from? Also, y’know, s’cute.

Roll up, roll up!
A lot of the pieces in this range are bulky and overbearing, which I usually love – my favourite furni is the portabandeira after all. That said, I’ve never really been a fan of the circus, so this one did pass me by somewhat. The ghost tracks are fantastic to use as an alternative to rollers, and there’s a cage which is good for when Ruth is acting up, but my favourite is neither of those.

LOOK AT THIS MAGNIFICENT FELLOW.
Bloody expensive though, so if anyone wants to buy me one feel free that’d be grand.

This was an interesting range. I don’t really like most of it myself as I find the blue-grey colouring a bit insipid and the fairytale background to it all isn’t necessarily my thing. Still, there are some useful room building pieces, and one really gorgeous item.

The seance book is another that’s become expensive over time, but that’s not surprising given that it was a rare with quite limited time in the catalogue, and it’s very very pretty.

Colour! Trumpets! Celebration! The Day of the Dead is a post-Halloween festival (falling on 2nd November) that makes a party out of death, rather than the mournful time that we’re used to. This furni range was therefore colourful and vibrant. I’m cheating here a little because for this one I’ve chosen the LTD that came out with the range, but how could I resist? 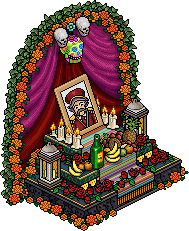 It’s big, it’s garish, it’s got Frank involved, and I want 30 of them right now.

Habbocalypse was a real return to movie horror for Habbo. It was an image of a parallel near-future, near-past, or possibly even present in which the day of reckoning had come and the cities were laid waste. There’s also a lot of purple involved. Crafting made an appearance here which was a brilliant additional concept that Habbo have since repeated as often as they can, since it brings in a buttload of money for them in wasted credits.
Quite fun though.

My top furni from this lot is the harbinger herself, the unassuming statue of an angel that RANDOMLY CRIES BLOOD. Good lord save us all.

Crafting returned in a massive way with the Ghost Hunter campaign, where players would buy “haunted” items of furni and cleanse them using craft ingredients that were gained by literally swarming a load of ghost bots in public rooms. It was an odd time. It’s tempting to go with another rare, but actually I think one of the prettiest pieces from this range is one of the standard catalogue items.

The haunted version of the mahogany bookcase is pretty cool but I really think the purified one is g-o-r-g-e-o-u-s, it’s so clean and classy. En masse they make wonderful libraries, and they go with plenty of other ranges.

We got a nice mix of fairytale and classic horror with 2017’s offering. There are some cool (if somewhat limited in terms of use) pieces of building furni included in this range, as well as some nice rares. Specific clothing items were released that fit with the theme nicely and are actually useful outside of the theme too. We also saw some “bundle exclusive” furni bounce around, and my favourite is from one of those:

If you don’t like this little guy, you’re wrong.
IT’S A MUSHROOM DUDE THAT YOU CAN SIT ON.

The most recent of Habboween ranges is reminiscent of the one 10 years earlier in the hospital – and indeed many of the pieces work with it. Like with the Ghost Hunter furni, these came in clean and unclean modes that required crafting ingredients to change, making the range in its entirety HUGE. I was finding it difficult to pick a favourite until I realised that there was only one real choice.

Yeah yeah it’s another LTD but just look! It’s a cat and it wears hats. It wins.

Do you agree with my choices? If so, tell me how great I am. If not, comment saying what your faves might be and I will laugh at you for being wrong.