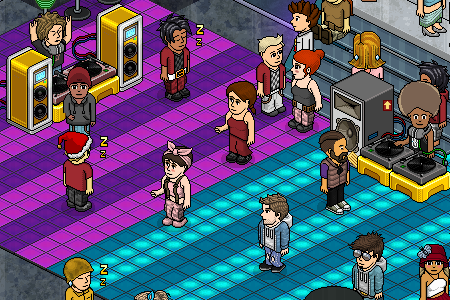 The Habbox Awards are back!

We have a range of categories from the kindest member of the community to the most dedicated staff member. But who are the Habbox Award Champions of Champions? Who is the funniest Habbo of Habbox? Who is the sexiest one of all? Oooo let’s find out!

Categories have been added, removed or renamed over the years. Some are a bit.. urm.. unconventional! So I’m going to skip right past the dumbest, weirdest, and catfish of the year. Drum roll please…

Yuxin has been awarded the “kindest” 3 times between 2012 and 2018. What an achievement to be nominated so many times. Kindness is a beautiful quality and anyone nominated for this award should be very proud.

Our very own General Manager has claimed sexiest member 4 times. Phwoar!  Habbox’s sexiest of all time. Can she bag another win this year, or will another Habbo steal the win?

Another dedicated member of Habbox. FlyingJesus has worked his way to the very top and he has won Funniest Member twice along his way to becoming General Manager of Habbox. If you read one of his articles or attend his events you will see why he has been so deserving of the Funniest Member award. Did he give us the most belly laughs and snorts throughout 2019 and scoop another win?

despect has won the title of Manager of the Year a massive 4 times. It’s not surprising he became Assistant General Manager of Community, considering it was the community who nominated him to win so many times! despect sets the bar high for the rest of the managers and has left the title open following his resignation and step back from Habbox. Who will follow in the champion’s footsteps?

Our team of DJs can certainly hold their heads high. It’s a great deal of responsibility to speak live on behalf of Habbox and provide entertainment for our listeners. Their efforts do not go unnoticed, as the community has chosen them to win department of the year twice over the last 7 years. The champion title could easily be shared this year though..

The most dedicated habbo to Habbox over the last 7 years, it’s not surprising she is our general manager. Winning 3 times in a row, Ozad picked up the most dedicated for the 2018 awards which stopped lawrawrrr’s winning streak. Will Ozad or lawrawrrr win it this year? Has someone else gone the extra mile during 2019 and beaten our General Managers? I guess I shouldn’t be surprised that Pyroka is banned from the HabboxForum… maybe they are in jail too? After all.. we did predict it twice during the Habbox Awards.

buttons has won Most Helpful twice during 2012-2018 Habbox Awards. buttons has also been a close champion for Kindest member and best overall member. It’s great people like buttons that make Habbox such a lovely fansite. The champion title could be shared this year if lawrawrrr wins it, or perhaps we will have a new contender?

Habbox has crowned Yuxin as the Best Overall Member of the year twice, what an accomplishment! No wonder she has received Habbox Merit and achieved over 100 referrals on the Habbox Forum. Will Ruth-On-Toast give us a repeat performance and take the crown for the 2019 award? We will have to wait until the 25th January at 7pm to find out…..

See you at the awards!!

Love the trip down memory lane 🙂

Thanks guys, was a joy to research 🙂