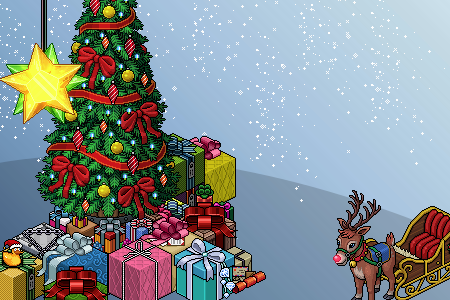 Christmas has arrived at Habbox! Our Habboxmas event is just round the corner - keep your eyes peeled for more information soon!!

So we’ve had a competition going on the forum for spooooOooOOOOooooOooooky stories to be posted by our members, and here they are! Thought it would be nice to compile them in case anyone wants a good read this Habboxween 😀

NOTE: these are entirely unedited, partly for authenticity, partly to save time, and partly because I’m suffering with a bad case of CBA *+*+*+

It was a dark and stormy night – the Moodlight had been turned right down on the black setting, and Clouds Of The Habbocalypse were stacked across the edge of the room. DJ-TripJay cautiously entered and peered into the shadows that lay ahead of him, struggling visually not only from the smoke of his “water pipe” but also the fog placed across the swamp floors. Slowly, he waded through the glowing green patches towards the other end of the room, where he spied a dull light flickering uncertainly. With every step he was greeted by a wired message – “GoOoOooo BaaAaaaAaAack!!” but he ignored the warnings and carried on forwards, thinking only of reaching that distant glimmer of brightness on the other side of the mass of swamp tiles.

Finally the smoke cleared; the bowl of his pipe was out. Lighting up again, TripJay continued on through renewed clouds of smoke, steam, and virtual fog, humming softly to himself. There could be no more than ten steps to go until he would be able to reach out and touch whatever it was that cast the light, and so on he went, still ignoring the message bubbles floating above him in whispered italics. He did not go back.

At long last TripJay had reached his goal. Had he not been blazed as bobba he might have recoiled in horror and wonder at what he saw now as the source of the light that he’d been following. It was huge! Towering about him, and swaying madly like a willow in a hurricane, there were stars of shining sparks spraying from its base. There were no feet, and indeed no legs, just two eerily long appendages that vaguely resembled arms on a cylindrical body possessing no true joints whatsoever, and the entire creature was coloured a deep cobalt, save for crude features near the top which could perhaps be the basic depiction of a face as imagined by a child or a madman.

With no warning, the stars stopped spinning and the lights went out completely. Now able to see only by the dim illumination of the lightning at the edges of the room, TripJay began to tremble. The last thing he saw was that ghastly ever-smiling face bearing down on him, before the entire screen went grey and save for the box in the centre with the terrifying message: “You were kicked from the room”.

One night a woman went out for drinks with her girlfriends. She left the bar fairly late at night, got in her car and onto the deserted highway. She noticed a lone pair of headlights in her rear-view mirror, approaching at a pace just slightly quicker than hers. As the car pulled up behind her she glanced and saw the turn signal on—the car was going to pass—when suddenly it swerved back behind her, pulled up dangerously close to her tailgate and the brights flashed.

Now she was getting nervous. The lights dimmed for a moment and then the brights came back on and the car behind her surged forward. The frightened woman struggled to keep her eyes on the road and fought the urge to look at the car behind her. Finally, her exit approached but the car continued to follow, flashing the brights periodically.

Through every stoplight and turn, it followed her until she pulled into her driveway. She figured her only hope was to make a mad dash into the house and call the police. As she flew from the car, so did the driver of the car behind her—and he screamed, “Lock the door and call the police! Call 911!”

When the police arrived the horrible truth was finally revealed to the woman. The man in the car had been trying to save her. As he pulled up behind her and his headlights illuminated her car, he saw the silhouette of a man with a butcher knife rising up from the back seat to stab her, so he flashed his brights and the figure crouched back down.

In 2005, a 42-year-old woman in Delaware committed suicide by hanging herself from a tree across the street from a residential area. Though the body was easily visible to passersby and passing vehicles, no one called the police for hours. Why? They assumed the woman swaying in the wind was a Halloween decoration.

DanyG (supposedly a true story from her life!):

So it happened about 5 or 6 years ago now. I had only been driving for about a year, and as you do when you’re young, I took my 3 best friends out for a spin one night.

See, where I live there is a lot of country lanes and nature, so its naturally quite quiet and peaceful and the roads are not overly busy, especially at night.

Any who, it was a Tuesday night and I was driving around with my friends listening to YouMeAtSix on full, singing along and having a blast. I turned off at a roundabout and drove down another road, but this one is a big hill, and quite a main road, but as it was 10pm so it was rather quiet.

As I was driving, I reached the bottom of the winding ‘hill’ like road, and coming round the last bend, I naturally slowed down; as I got around this bend, I noticed a woman standing on the pavement on the left hand side of the road, staring blankly at the car. Ok so, you might be thinking ‘how is that even creepy’, well… the roads are so narrow, that she was about 10-15 feet away from the car, and I couldn’t help but notice that she had NO pupils, instead, her eyes were COMPLETELY white, like something out of a horror movie. Now, I wasn’t the only one to see this, my friends did too, and they were even more freaked out, to the point we physically had ‘terror’ tears streaming from out eyes.

As I drove past, us all looking at this woman in complete terror, I looked in my rear view mirror once I had passed her, and noticed she slowly walked into the middle of the road and stopped there. By the time she stopped in the middle I had sped off, but the FREAKIEST thing is that it happened again a week later, on a TUESDAY night again, and unbelievably, at 10pm again!

The second time I saw her, I was driving with my brother down the same hill and she was in the exact same spot as she was a week before, and again.. I was TERRIFIED!
My brother freaked out and was shouting ‘WHAT THE HELL WAS THAT’, and as I drove off I explained to him that I’d seen her a week earlier on the same weekday at the same time. Again, she stared into the car and as I passed, walked slowly into the middle of the road.

I remember what she was wearing, because she wore the same outfit on both occasions: An old woman style purple cardigan, a knee length light denim blue skirt and sandals.

A few weeks after it happened I told my 2 older sisters the story and they demanded we go out on a Tuesday night at 10pm to see if she was there, but she was not there, and I never saw her again after those 2 times, thank goodness!

It was by far the FREAKIEST thing that I have EVER experienced!

I hadn’t seen the kid before.
Most of the children in the neighborhood, I knew. But on Halloween, they arrived from all over.
He was dressed in brown shorts, and a ripped, blood-stained tee-shirt, and his face was pale. Even in the warming glow of the porch light, his face rejected the light.
“I’m all out of candy,” I said, as politely as I could.
“That’s okay,” the kid said. He looked past me, into the living room. His big, unblinking bloodshot eyes taking in every corner of the room. “Are you all alone?”
“Look, I’m all out of candy,” I repeated.
The kid shrugged. “That’s okay.” And he pushed his way in, walked into the center of the room and dropped his cheery plastic trick or treat pumpkin on the rug.
“Maybe we should find your parents. They’re probably looking for you.”
“That’s okay.” The kid dug around in his pumpkin.
I stepped outside. There had to be someone looking for this kid. The street had gone quiet. The Woods’ porch light was already out but I could see they’d forgotten to close their front door. I made a mental note to pop over there after I got this kid back to wherever he was supposed to be.
The living room was empty. The kid’s plastic bucket still on the rug. I would’ve expected it to be filled with candy. Bright colors. Shiny plastic. But there was something else.
I leaned over the bucket, the way you’d look down a mysterious hole in the ground. Inside was a wig of some sort. Long brown hair. Wavy though. And at that moment I felt like I recognized it. The way you’d see someone’s face and your brain would instantly knit together the face and name. I knew the hair.
I lurched back up at the squeak of shoes on the tile. The kid. Standing in the frame of the door to the kitchen. He clicked off the light to the living room. I was in the darkness.
“Turn that back on.”
I could see his silhouette give the tiniest of shoulder shrugs. “That’s okay.”
He raised his hand. A fat little object in his slim fingers. The prods zipped through the air and sunk into my chest. Electricity raced through my body. The room went dark.
I awoke to a searing pain on my head and something dripping down onto my eyes. I blinked to clear it away but it was coming too fast. With my hand, I reached up to clear the liquid but my hand was bound. I was tied to the chair. Feet. Hands.
The pain surged. A blade sawing through the soft skin on my skull. It moved around the circumference of my head. I tried to scream and shake my head but the pale little hands pulled my head back into position. With a final wet rip, my scalp came off.
The little boy tossed it into the bucket. I whimpered through the dry sock in my mouth.
The doorbell, chimed happily. Amanda was stopping by after class, I remembered.
The boy patted me on the shoulder. “That’s okay. I’ll get it.”

So which was your favourite? And do YOU have a story to tell?

Whatever you’re up to, Happy Habboxween everyone!

A delight to work with and always churns out incredibly high quality graphic content for us!

For making our community that little bit brighter and happier in dark times!