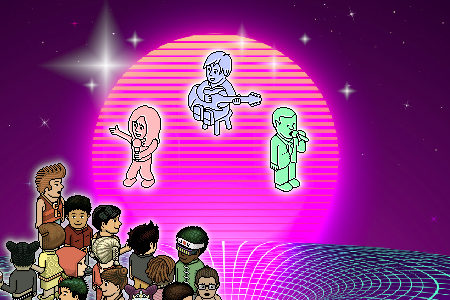 The entries are in, and it's time to vote! Click here to listen to our singers and pick your favourites!

Fancy being a DJ? Writing articles for the Habbo world to read? Hosting events? Working on our famous Wiki? You can do all this and more as official staff at Habbox! 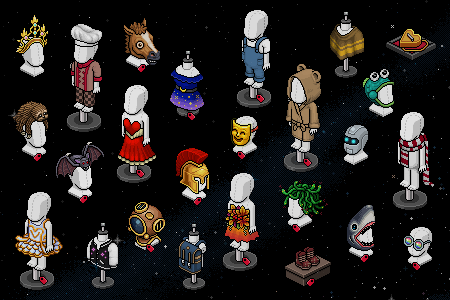 Need to revamp your wardrobe? Check out the latest clothing Habbo has to offer, right here

I know I have problems. I just can’t stop scoffing sweets! Anything with high amounts of sug

ar in I want to gobble up! I guess you could say I’m addicted to sugar…. and that’s probably right.

From looking at me you probably wouldn’t guess that I am, not that I look extremely healthy, but I’m quite thin and not large like you would expect someone who only eats sugary foods. It’s not just food; I also only drink fizzy drinks which probably doesn’t do my teeth a whole lot of good. It is definitely diet I wouldn’t recommend… I wouldn’t say I feel ill all the time, but after a binge, I do feel a bit sick. It seems a good idea when I am buying the sweets, and while I’m eating them it definitely seems a good idea, but about half an hour afterwards I feel extremely sick. It’s not just me suffering though, my wallet is also suffering. I spend A LOT on sweets and fizzy drinks! I usually spend between £10 – £20 a week. And I’m funding it out of money I have laying around, this is Christmas money, birthday money, pocket money, savings, everything. I know that I am wasting my money but I have no self-control or discipline!

This is definitely not a diet I would recommend and I am trying to take steps to limit my sweets intake! I’d love to hear your opinion on my diet so do leave your comments!

(No Ratings Yet)
Read more...
The Pretty Reckless are off to the US!0
By Tom - Posted

After their huge success tour around the UK, The Pretty Reckless are packing their bags and are off to the USA! The great star Taylor Momsen from the famous TV series Gossip Girl and her rockin’ band are hitting the road starting off in Los Angeles to perform their latest album Light Me Up.

In the UK The Pretty Reckless‘ album has already been at the top of the charts for six whole weeks which didn’t surprise me as I am in love with this album! They’re so great that they have even toured in the very famous Vans Warped Tour with well known bands around the country!

The album consists of ten brilliant songs which are My Medicine, Since You’re Gone, Make Me Wanna’ Die, Light Me Up, Just Tonight, Miss Nothing, Goin’ Down, Nothing Left To Lose, Factory Girl and You and now it’s the American’s turn to listen to these great hits! Keep reading and I shall post a few songs from this album, but you’ll have to check the album out for yourself!

Click ‘Read More’ to view their tour dates and whereabouts and also some of their hits!

(No Ratings Yet)
Read more...
Facebook? Pregnant? No thanks!0
By Tom - Posted

Now is this article going to be a moan about teenagers, underage sex, or Facebook? All three it turns out. I’ve just signed into my Facebook to be greeted by a wonderful status on my newsfeed:

“didn’t know you could get pregnant whilst you’ve got the implant in. l:”

I’m stunned. Why the heck would you post this on Facebook of all places? I’ve seen it more and more lately, people posting such pointless rubbish on a social networking site! Call me old fashioned, but I’m not too sure why anyone would want to broadcast someone’s sex life over the internet – it’s just immoral and downright stupid. This person is younger than me and things like this are being posted. Ugh.

Gone are the days of teenagers acting like human beings; the stereotype of lazy, spotty, binge-drinking idiots is slowly becoming a reality in my eyes. Facebook is a social networking site but I think some people may be taking this to a whole new level. Facebook has great potential and it has already taken off to be one of the most visited sites in the world; yet we need to remember that it is unsafe in the hands of unsafe people. Be careful what you post and be careful who you add!

(No Ratings Yet)
Read more...
31 Killed By Bomb Attack In Moscow0
By Tom - Posted

31 people have been confirmed dead with another 130 injured after a suicide bomb blast today at Moscow’s biggest airport, Domodedovo.

Out of the 130 people that were injured, 51 of those are currently in hospital, 35 of them in serious conditions. The blast took place in a lounge area, close to the International Departures zone, near a cafe, contrary to earlier reports that the bomb went off in the international luggage reclaim zone. 31 have been confirmed dead, but emergency staff called to the scene have claimed there could potentially be up to 70 losses.

In what must have been a terrifying expirience, Mark Green, a passenger from a British Airways flight had just left the terminal when the bomb went off. “Literally, it shook you,” he told the BBC. “As we were putting the bags in the car a lot of alarms were going off and people started flowing out of the terminal, some of whom were covered in blood.”

It is Russia’s most devastating attack since March 2010, when two Muslim female suicide bombers let off explosives in the metro, killing approximately 40 people, which was Russia’s worst attack since 2004.

This news is really upsetting to hear. I hate to think we still live in a world where people think something like this is necessary to make their voices heard. I hope the death toll doesn’t increase any time soon, and my best wishes go out to the families whom have lost loved ones today.

American singer Bruno Mars has topped both the singles and albums charts in the UK this week, increasing his huge popularity.

Mars’ single ‘Grenade‘ retains the top spot for the second week running, holding off tough competition from the likes of Adele at number two, P Diddy at number four and Britney Spears, whose comeback single ‘Hold It Against Me‘ debuted at number six, which is surprising considering the amount of hype that’s been surrounding the song, however it is likely to climb.

Else where in the singles chart, Jessie J maintains a strong position at number three with her debut single ‘Do It Like A Dude’, and another ‘big for 2011’ artist, Wretch 32, who charts at number five with the song ‘Traktor‘.

Bruno’s debut album ‘Doo-Wops & Hooligans‘ lands straight in at number one on the other side of the charts this week, knocking Rihanna’s fifth effort ‘Loud‘ into second place, after dominating the UK charts in recent weeks.

Another new entry in the album charts comes from rock band White Lies with their second album ‘Ritual’, which charted at number three, following on from their impressive debut album which hit the number one spot. Adele’s debut album ‘19‘ also re-appears in the top ten this week at number eight, ahead of the release of her new album ‘21‘ out tomorrow.

Though I’m not a huge fan of Bruno Mars, it would be hard to dismiss his talent and deny that he has been extremely successful in his career so far, and I think he will go on to achieve big things.