Sometimes you might need a wired setup that allows you to choose between moving a player to a certain area or removing them from the room entirely. This guide will show you how to set up a dual-use version of the “bopper” that can perform both functions, depending on the state of a changeable furni like a lamp.

If you want a guide to set up a normal bopper that will send players to an AFK area in the room, click here!

Step 1: Set the bopper to move

You will need to make a stack of Wired Trigger: Repeat Effect (set to 0.5 seconds) and Wired Effect: Move Furni Towards Nearest User (set to select the item you want to be the bopper), and also find a way to make the bopper not move when you don’t want it to! For that, you can either trap the object in place or add in a WIRED Negative Condition: Furni states DOESN’T Match on the same stack, and set it to the bopper in its “resting” place. 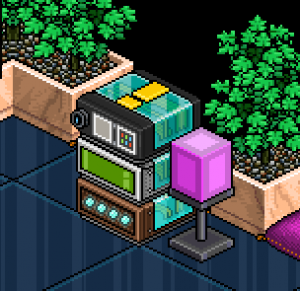 Step 2: Set up the bop/tele stack

This step is based around the WIRED Trigger: User Stuff Collision, which requires no settings itself but forms the base of your bopping wired stack.

With this you will need a WIRED Effect: Teleport To Furni which you will set to the “exit” area (usually some seating in an entrance lobby). 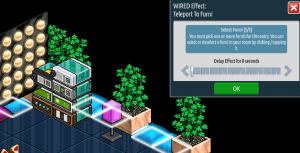 As well as a WIRED Effect: Match Furni to Position & State set to make the bopper furni go back to its original spot, where it should not be able to carry on moving around. You will also require a WIRED Condition: Furni States and Position Match on this stack, and set this so that it is only in effect when your chosen lamp/switch is OFF. 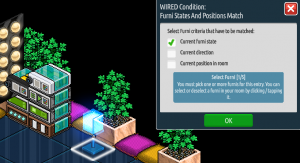 Step 3: Set up the bop/kick stack 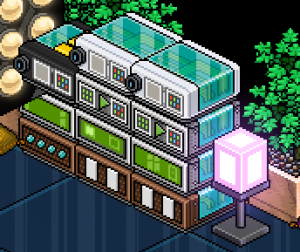 With these three stacks, what should happen is that placing the “bopper” next to a user will teleport them to your waiting area when the lamp is off, and will kick them entirely from the room when the lamp is on – simply toggle the lamp to choose which function you require!